Invention of the Graphical Waterfall®

The Graphical Waterfall® was invented by Stephen Pevnick, a professor of computer art at the University of Wisconsin in Milwaukee, Wisconsin, USA. 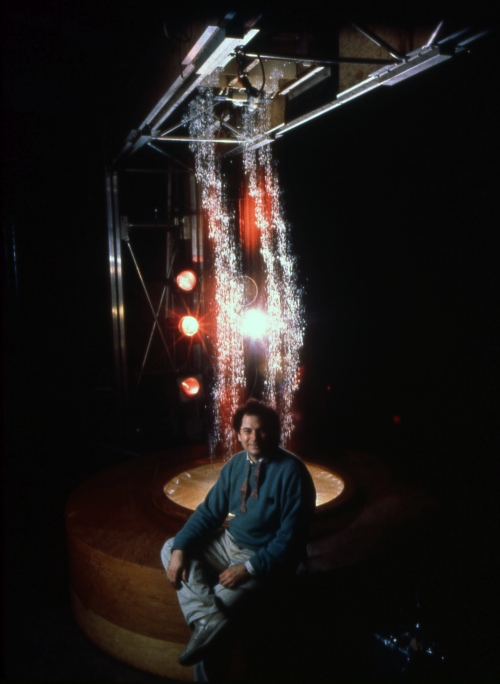 When Pevnick was a graduate student, he became interested in exploring nature at a very rare and beautiful moment as art. In 1973 he began experimenting with sound and space using a computer to produce falling water droplets to make sound on a drum. Upon producing sound he noticed that with proper timing it was possible to build falling images in space!

In 1974 Pevnick received a grant from the University of South Florida to explore the idea of forming graphics in free falling water droplet images. In 1977 he produced the first three dimensional computer controlled waterfall image, a falling diamond, on a machine which would evolve into today's Graphical Waterfall®. The valve system was a horizontal square, 4 feet by 4 feet and had an 8 nozzle by 8 nozzle grid totaling 64 nozzles.

At the University of Wisconsin - Milwaukee, where Pevnick began teaching in 1978, he was able to develop the first one foot square graphic producing waterfall with the help of a National Endowment for the Arts, Design Arts, Project Fellowship. In 1982 he developed the technology to spell with letters in English and Western languages using free falling water droplets and in 1983 he won one of 10 Design Excellence Awards from the Industrial Designer's Society of America at their National Conference in Chicago.

The Graphical Waterfall® was first exhibited with the Klein Gallery in 1988 at the International Art Exhibition at Navy Pier in Chicago. The waterfalls were called the "Rainfall Project" until the 1990's when the name was changed to Graphical Waterfall®. 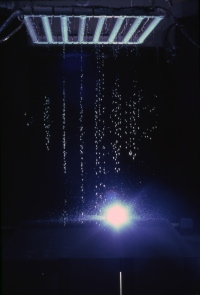 Early ideas about nature at a very rare and beautiful moment as art evolved into the idea of "painting" graphics and words with water. The resulting Graphical Waterfalls® make kinetic graphics like lines, shapes and multiple dancing ribbons which are a synthesis of art and nature. When a Graphical Waterfall® is programmed, there are always kinetic graphics interspersed among the words and logos to keep an element of surprise or mystery which keeps viewers watching and waiting to see what will come next.

Pevnick's current research centers around real-time multimedia and computer controlled kinetic sculpture and water. As the artist and designer, Pevnick oversees the graphical content so that the waterfall maintains a unique aesthetic. The Graphical Waterfall®, when installed in a large public venue, blurs the boundaries between Art, Design and Theater and provides viewers with a unique, unforgettable experience.